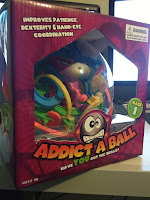 Last night I swung by Westfield to see Lyndsey to shop and hang out. We went from shop to shop and I was dragging her shopping bags hitting shoppers left, right and centre!!
We ended up at RED 5 and I went to buy “Addict-a-ball”!
After an hour later or so, we sat down to eat some Pho… She ate anyway, I just had iced coffee… Mmmmmmmm… Delicious!
She started talking about the value of money and how important it is to her..
It bought me back 6 years of how I once lived my life. There was a person once upon a time who thought the same way. Now it becomes a mere memory… Funny that…
Finishing up with the food, we went home to find out our train was delayed and ended up waiting up to 30 minutes but we had some jokes and laughter… Pretty awesome stuff!
MOVIES
Instead of my usual nights of playing games, I changed my pace and watched a film. Last nights theme was Halloween so why not a horror? So Tim (my brother) and I plug in Grave Encounters…
This film was a mix of Silent Hill and Blair Witch Project. It held comedy and jumpy moments.
It was about a crew of individuals who wanted to explore a haunted hospital. At first they walk in brave but they had no clue what they had walked into…
The film was disturbing since I usually don’t sit down to watch these things but it ended with questions in my head and as I hear, there will be a sequel so maybe they will be answered. Overall? I think it’s definitely worth watching. Felt realistic..
DEVELOPMENT
Working more on my Titanium project but creating a base template to develop upon. So I am just setting up all my files in an organised format and entering bits of code to keep it consistent.
I guess you can say I am still designing my structure of the program… Early days….
SUMMARY
I am keeping this structure of social and gaming sides even. I seem to be doing pretty good this week as I feel as though I have done something productive everyday so far!
Lets keep this going…!