Posted on April 14, 2013July 24, 2013 by ronnguyen
Mac (also known as the Macintosh) concentrates upon visual sectors. In my opinion, Apple works a whole lot on making things look pretty and this is probably what pulls people in.

The graphics are smooth, the colours makes my monitor brighter and the animations are amazing. Oh and I can create apps for the App store too! Bad points? Well, there are several I’d like to jot down.


The folder management is terrible! The tidying folders in icon mode is a mess! There is no auto tidy or anything. You have to manually tidy up every time! The only time when it does it automatically is when you right click and click on “Arrange By” and then when a new folder comes in, it ends up messy again. 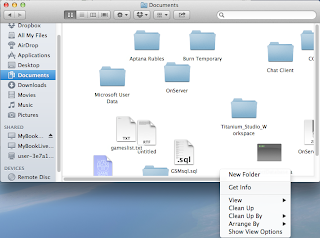 I know it’s not much of an issue however, it does bother me to always having to right click and manually indicating to tidy it up for me. This is where I result in the columns view and even that its not perfect! To go back folders, I have to scroll back? But hey, its less painful.

I guess the next would be the shifting to other open applications. By using the Cmd + Tab keys, I can access to my opened applications but what makes it a failure would be Apple makes it a Grouped Selection! What does this mean? Well, when you switch over to Google Chrome, it shows you ALL of the windows you have opened with that particular application! So say for example, I have a thousand windows opened for the Finder, when I switch off to another application and decide to come back, it will open ALL RELATED Finder windows and then try and look for the window I really want.

Before was a huge issue but gaming was very limited for the Mac. I can’t say if it’s an issue now since I’ve stopped play games on my PC’s generally. But Windows was very ahead on the gaming and I did my research on Macs back then and there were not many Mac related games so that made me not want to buy a Mac. Now that I own a Mac, this may have been the reason why I stopped gaming on the PC just knowing the fact that gaming is limited. Why do I have a Mac? Just because I have the capability of creating apps for the App Store.

The Home and End buttons are a nuisance! So I’d like to specify that I am using a Microsoft keyboard on a Mac machine but still… When I am on Dreamweaver, I am programming and the Home and End buttons work correctly but then when I switch over to Flash or even Chrome, these buttons go to either the top or bottom of the page!? There are times when it even works on Chrome typing out this blog post so thinking logically, the shortcut keys to get to the beginning and end of the line is the Cmd + Arrow Keys which is fine by me. But whats next? Dreamweaver doesn’t want to go to the beginning or end of the line with these keys! So WTF!? Make up your mind! Its either one or the other.

Finally, the access to applications! So on a Mac, you see a docking station at the bottom of your screen. That’s great since it is so easy to access. So what’s the problem? Well, you have to assign what goes on that docking station so how do I access my newly installed applications? So there are 3 ways I can get to them! Either use Apple’s Launchpad displaying all the applications in an iOS themed display, using the Spotlight located on the top right of the screen and typing the application or navigating to the Finder and click on “Applications” there. I suppose my problem is just that there is no easy access to browse my applications. The Launchpad is pretty but the scrolling through applications in that format is a waste of space. iPads and iPhones need to do that since it has limited spacing so why integrate it onto a bigger screen!? The Spotlight feature I cannot browse through the applications I have since I have to type it. There are times I just get frustrated remembering what application I just installed and with the text field blinking at me just makes me want to bang my head! So I use the Finder. It displays my applications in a list format which is a great view and can browse through them. The problem here is that my attention diverts elsewhere as soon I click on Finder since the default view is All My Files resulting that I end up looking elsewhere and forgetting the main reason why I am on the Finder in the first place.

So my review as a whole? These issues have got me at an uneven state and truth be told, the Windows platform beats Apple but just waiting for the right time to switch so I can use this for a little while longer.

If I was to recommend an operating system, I would suggest Windows definitely! DONE!

One Reply to “My Mac review (Using it for a good year).”